In the history of the UEFA Women’s EURO, England had only scored once in six qualification games against Norway, so their matchup with the six-time champions was expected to be a tight race for first place in Group A. Performance that made history and broke records. The 28,847 spectators in the Brighton & Hove Community Stadium ranked fourth in Women’s EURO game attendance.

Both teams start the game with a 4-2-3-1 formation with four defenders, two center-backs, and two full-backs behind a midfield line of three, including the single pivot.

England has dominated from the beginning attacking the opposition. Just 10 minutes on the clock, England got a penalty with the help of the foul of Ingrid Engen (Norway). After 5 minutes, Lauren Hemp’s (England) right footed shot from very close to the range to the center. Video Assistant Referee (VAR) Technology decision was used to confirm the goal. Just after 15 Minutes, England was 2-0.

Mead then added two more goals within five minutes, heading Hemp’s ball in and swatting a shot past Pettersen in front of a dimly bewildered home crowd. White added a sixth before the half, not to be outdone.

Substitute player Alessia Russo got the chance to calmly nodded in from Lucy Bronze’s delivery to make it seven. The crossbar only stopped substitute Alex Greenwood’s brilliant long-range shot in the 74th minute, and Mead’s hattrick goal seven minutes later capped an incredible night for England. Guro Pettersen – the goalkeeper for Norway, was being tested throughout the match.

England team utilizes a 4-2-3-1 formation averagely throughout the game. Even though this formation needs more coordination between team players, England uses the attacking option’s strength to concede more shots. Norway used a 4-4-1-1 formation to be on the defensive gameplay. 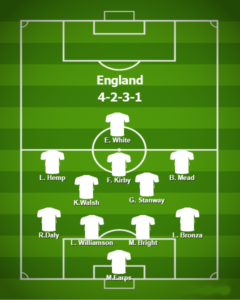 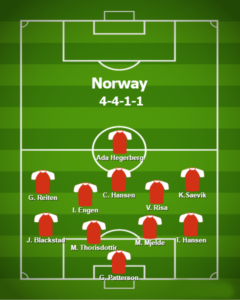 There has been a great attack from the England team, their ball possession was sixty-five percent and was dominion throughout the Tournament. Team main attackers Bethany Mead (England), L. Hemp, and E. White were continuously looking for an overload opportunity to link up & penetrate the opposition. Altogether twenty-five shots were played by the England team, and fifteen shots were on target. Most of the shots were by the main attackers. There were eighteen successful dribbles out of thirty-one. England Team used aerial challenges positively, with sixteen successful out of twenty-five. They were attacking from the beginning, putting pressure on the opponent team, thirteen instances were recorded, and eight were converted to goals.

The team showed poor performance. Only three shots throughout the match. Significantly there were three yellow cards with nine fouls and twenty-six times they had lost the ball in their half.

Bethany Mead (England) was the best performer in the game with a hat-trick of goals and she became the first woman to score an international hat-trick at Wembley. Her incredible season was further enhanced by a hat-trick for England.

Bethany created five chances in the match. Thirty-eight accurate passes, three crosses, and two successful dribbles were in her game. Mead has produced more opportunities overall than any other player and will be a key component of Arsenal’s effort to unseat Chelsea at home and compete with the best teams in Europe in the upcoming season.

There were three yellow cards for Norway in the second half. Julie Blakstad (Norway), Celin Ildhusoy (Norway), and Frida Maanum (Norway). Total of nine fouls by the Norway Team and only five by England. The England team had 25 shots on the goal, but Norway only had four.

When England plays already eliminated Northern Ireland in Southampton on Friday, they will want to finish the Tournament’s first round with three victories in a row. If Norway defeats Austria the same evening in Brighton & Hove, they will come in second.